Vienna is not only the capital of Austria, it is a city where all the important political, business and cultural elite gathers from all around Austria.

Between East and West

And not only from Austria. In the UNO City (Vienna’s international center) business man and women from all around the world gather together and make it more than just a part of Vienna. The modern metropolis finally found its life again. For decades, Vienna lived torn between west and east, closer to important big cities, hidden behind the iron curtain. You can almost kick a football from outskirts of Vienna to Bratislava’s outskirts. Other major cities, Prague, Zagreb or Ljubljana are just a couple of hours away, making Vienna the center crossing of all most important capitals of the Central Europe.

The development of Vienna has been almost unbelievable in the last years, its Airport, now with a new, modern passenger and cargo terminal and a great railway connection, is one of the most important airports in Europe. All arriving passengers can enjoy different ways of public transport to travel to Vienna’s downtown. Different parts of the city are connected with subway lines, first build in 1987, tram and bus connections are fast and on almost always on time. You can buy one ticket and use all the different ways to travel around Vienna. The romance in you will awaken, if you rent a coach, that will take you around Vienna and surprisingly, the trip will not suck out your wallet completely. 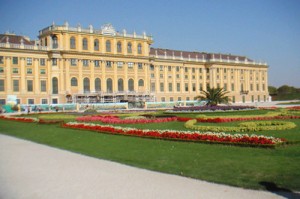 Different cultures and nations have entered and left Vienna in the past, Celts, ancient Roman, Turks, and later on French, Germans and Soviets have now left and Vienna is Austrian again. The history of the town is most connected to the Hapsburg, who ruled the city and the country for 640 years, since the battle at Marchfeld in 1278. Vienna’s rulers are known around the world, Maximilian, Joseph Ferdinand or Maria Theresa of Austria, names that left their influence on almost every palace, church, museum and in other places, that are admired by thousands of tourists every day.

You need to see the Hofburd and Belveder palace, the Schönbrunn palace with its zoo, Albertina Graphic arts collection, Natural sciences museum, the Parliament building, town hall and the giant Riesen rad in the Prater park. Take a short break and enjoy a Wiener Schnitzel or and a piece of the famous Sacher cake. Vienna will show its best sites to you, and it will mesmerize you, all you need to do is take some time to enjoy it, but do not, ever, come with an empty wallet.

Posts from the same category:

The Basics of M.I.C.E and Its Role in Tourism

When it comes to tourism, M.I.C.E stands for Meetings, Incentives, Conferences, and Exhibitions.

Begin typing your search term above and press enter to search. Press ESC to cancel.